Chelsea have the chance to put another nail in Fulham’s coffin in Sunday’s west London derby at Craven Cottage.

Fulham start the weekend 10 points from safety and firmly on course for an immediate return to the Championship after a run of four straight defeats which resulted in Claudio Ranieri’s dismissal on Thursday night.

Chelsea have had their problems recently but have realistic hopes of a top-four finish after an important 2-0 win at home to Tottenham in midweek. When is it? Sunday March 3rd

Where is it being played? Craven Cottage

Who is the referee? Graham Scott

Here are our best tips for the Fulham vs Tottenham match for which we also have a range of other markets available:

Kepa Arrizabalaga’s punishment for refusing to be substituted during the Carabao Cup final dominated the build-up to the Spurs game but Maurizio Sarri’s decision to drop the goalkeeper against Spurs proved irrelevant.

Chelsea shackled their London rivals so well that Spurs failed to manage a shot on target and Pedro’s goal put them in control before Kieran Trippier’s own goal made the points safe. That left Chelsea seven points behind Tottenham with a game in hand and the race for the Champions League places is hotting up.

Sarri said: “I think maybe with this result we could involve Tottenham in this fight. The gap is very large, seven points, but we have one match (in hand).”

Sarri’s position has been precarious and he does not expect the Spurs win to end questions over his future.

“I spoke with the club two, three times in the last days. The problem wasn’t so big,” Sarri said. “It’s not a big problem for me. In this job you are under pressure every week, if you’re lucky every six months. It’s normal.

“If you lose two matches, three matches in a row you’re under pressure. I think it’s normal for every coach, maybe something more in Chelsea.”

.@CesarAzpi explains the defensive changes that we have adopted recently and how they are helping the Blues attack! ðŸ’ª pic.twitter.com/m7BG7rBw0b

The Cottagers’ miserable campaign continued with a 2-0 defeat at Southampton in midweek and there is little reason for optimism heading into Sunday’s game even with Scott Parker in temporary charge.

Fulham have failed to take a point off any of the top six and have lost eight of those nine games by more than one goal, so the first of our Fulham vs Chelsea betting tips is the Blues to win by two goals or more at 11/8.

Eden Hazard and Gonzalo Higuain are the joint favourites in the first goalscorer odds at 16/5 and are the obvious candidates to open the scoring. Higuain has only netted in one of his seven appearances for Chelsea though, bagging a brace against Huddersfield, and we feel Hazard is more likely to set the visitors on their way especially as the team’s regular penalty-taker.

Marcos Alonso scored eight goals in all competitions for Chelsea last season but has managed only one this time around, which was his late winner against Arsenal in August.

He has provided seven assists in the Premier League though, highlighting his attacking threat, and can be backed at 6/1 to end his drought this weekend.

Chelsea have struggled on their travels against their top-six rivals this season, having lost at Manchester City, Tottenham and Arsenal.

They have been ruthless against weaker opposition though and have won every away match against a team in the bottom eight of the table heading into this weekend. 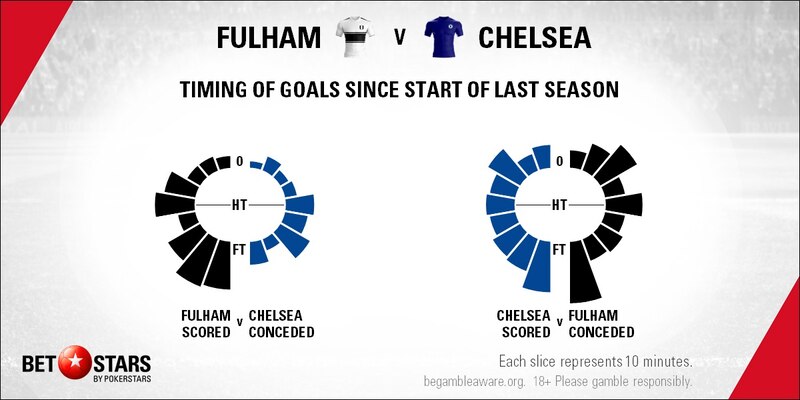 There are plenty of ways to get behind Chelsea at a decent price and one option we like is backing the Blues to score a penalty at 5/1.

Only two teams have given away more spot-kicks than Fulham’s six this season and only three teams have scored more penalties than Chelsea so we’re happy to take a chance on the Blues adding to that tally.

We’re also having a speculative punt in the correct score market for the last of our Fulham vs Chelsea predictions.

The Cottagers have conceded at least three goals on 10 occasions this season and with Chelsea having enjoyed 3-0 wins at Huddersfield and Southampton, a repeat of that scoreline looks a tempting proposition at 11/1.

Andre Schurrle, who has missed the last two games, will not be available for Fulham due to a virus. Marcus Bettinelli and Alfie Mawson remain sidelined with long-term knee problems.

Arrizabalaga could return in goal in place of Willy Caballero for Chelsea. Sarri plans to rotate his squad after a challenging series of fixtures.

Fulham have scored as many goals as Newcastle, who are well on course for survival, but their defensive problems look set to condemn the Cottagers to relegation. They do have an attacking threat so we expect goals at both ends but Chelsea’s extra quality should shine through.

Acca Bonus up to 100% – Place a treble or higher across any sport and if it wins, we’ll boost your winnings in cash. Remember to check that all your selections are higher than 1.50 (1/2). T&Cs apply.