Brendan Rodgers takes charge of Leicester for the first time since joining the club from Celtic on Tuesday.

The former Liverpool manager was in the stands on the day of his appointment to watch the 2-1 victory over Brighton, the Foxes’ first win since New Year’s Day.

Watford had lost just one of their last eight Premier League games until they visited Anfield on Wednesday night when they were battered 5-0 by Liverpool which ensured they slipped to eighth place on goal difference from Wolves. When is it? Sunday 3rd March

Where is it being played? Vicarage Road

Who is the referee? Jonathan Moss

Here are our predictions for Sunday’s clash between Watford and Leicester for which we also have a range of other markets available:

Rodgers is back in the Premier League for the first time since being sacked as Liverpool manager in 2015 having added seven trophies to his CV after a successful three-year spell with Celtic.

The Foxes moved up to 11th place with Tuesday’s win against Brighton, but Rodgers has a tough baptism on his hands with a trip to Watford who are now just five points ahead of Leicester in the Premier League table.

Leicester’s caretaker manager Mike Stowell revealed that Rodgers spoke to the players after Tuesday’s game and thinks the Northern Irishman will bring “something special” to the club.

Stowell said: “He’s just come into the dressing room after the game. He was very positive, bouncing. We’re all desperate to start working with him.

“The lads were in awe listening to him. He said ‘I’ve only left to come here for one reason and that’s to work with this group of players’. That speaks volumes for this young group of players.”

Claude Puel was criticised by Leicester fans for being too negative and it is hoped Rodgers will instil a more attacking style of play during his reign.

Rodgers explained his philosophy to the club’s website when he said: “Hopefully we can bring in a structure to how we play, which firstly means that you’ve got to defend well, so you’ve got to press the game.

“Supporters maybe have seen my teams at Swansea, Liverpool and Celtic and will recognise how intensely we try to press the game. That’s the base then to use your qualities technically so that will be something that we look to do over the course of time.”

Watford have lost five games at home this season, while Leicester have picked up more points on the road than they have at the King Power and with a new manager in charge the first of our Premier League predictions for the weekend is for an away win at 39/20.

If you’re interested in more football tips, check out our regular betting columns:

The shackles could be off for Jamie Vardy who scored his second goal in three games in the win against Brighton and also broke the deadlock in the 2-0 victory over Watford earlier in the season. 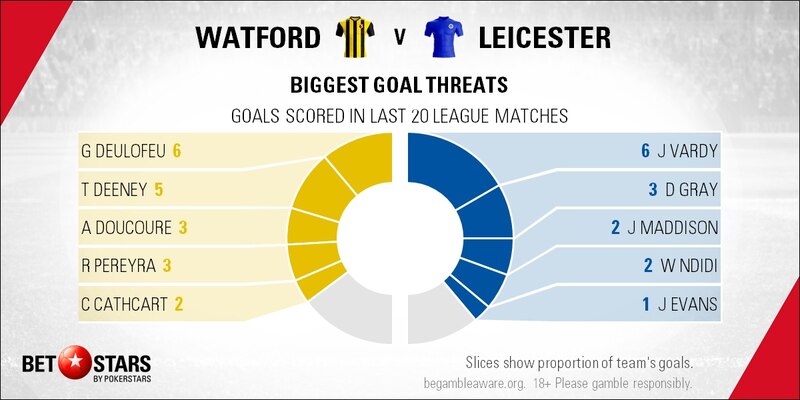 The former England striker admitted Puel’s possession-based philosophy did not suit his style, but he should get more chances facing goal under Rodgers and so he is our first goalscorer pick at 4/1 for Sunday’s game.

James Maddison pulled the strings against Brighton and in slightly happier times grabbed the second goal against the Hornets at the start of December.

The former Norwich midfielder has not scored in nearly three months but a change of regime could prove fruitful for a player that has found the net five times this season and who makes the cut as our anytime goalscorer pick at 16/5.

Possession is no longer the name of the game for Leicester, who could revert to the direct style which brought them such success under Claudio Ranieri.

However, Rodgers has indicated he is likely to deploy a pressing style made popular by Liverpool boss Jurgen Klopp but that may take some time to get used to for a team playing under a fifth manager since the summer of 2015. Leicester’s players will have been buoyed by the way they ended their winless run against Brighton and they have won as many games away from home as Arsenal this season so a trip to Watford should hold no fears.

City also have the third highest percentage (64%) in the both teams to score market on their travels and with a high-tempo match expected, the next of our Premier League predictions this weekend is for Leicester to win and to concede at 9/2.

Finally, we’re tipping over 2.5 goals at evens which would have paid out in three of the last five meetings between these sides.

The Hornets have produced a total of three goals or more in 69% of their home matches this season – the third highest in the Premier League – and with Leicester expecting to be more attacking on Sunday that trend should continue.

Watford will have Jose Holebas available again following suspension while Miguel Britos returns having missed the defeat at Liverpool through illness.

Rodgers has no new injury concerns and is not expected to make wholesale changes. Daniel Amartey (ankle) and Marc Albrighton (hamstring) are the only players out.

Nine of Leicester’s 14 away games have seen goals at both ends this season and with a more attack-minded manager at the helm, both teams to score at 3/4 seems the right play at Vicarage Road for Sunday’s noon showdown.