West Ham vs Newcastle: Schar the love for draw at London Stadium

Newcastle head to the capital buoyed by successive home wins which have eased their relegation fears.

The Magpies’ 2-0 victories against Huddersfield and Burnley mean they are at six points clear of the relegation zone ahead of Saturday’s game at West Ham.

Manuel Pellegrini’s Hammers are unbeaten at the London Stadium this year, a run of five games which included an FA Cup win against Birmingham. 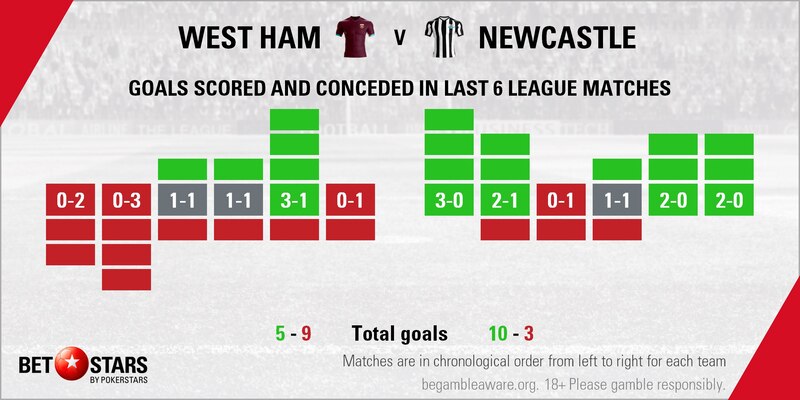 When is it? Saturday 2nd March

Where is it being played? London Stadium

Who is the referee? Chris Kavanagh

Here are our predictions for Saturday’s clash between West Ham and Newcastle for which we also have a range of other markets available:

West Ham crushed Newcastle 3-0 when the teams met at St James’ Park at the start of December after which Pellegrini crowed about the performances of Marko Arnautovic, Felipe Anderson, Javier Hernandez and Robert Snodgrass. His opposite number Rafael Benitez was left to rue the display of a Newcastle side that had won three on the spin against mid-table teams before they were taken apart by the Hammers.

He said: “Obviously it’s a reminder that still we can improve things, and we have to improve things. There are two ways: one is working harder and better, or bringing in players
who on their own can make the difference.”

ðŸŽ¥ Rafa BenÃ­tez has warned that there’s no room for complacency, despite Newcastle United making it two wins and six points in four days with last night’s 2-0 victory against Burnley.

The latter finally came to fruition in January with the club-record signing of Paraguay attacker Miguel Almiron whose pace terrorised Huddersfield last weekend and who nearly scored against Burnley on Tuesday.

Newcastle were just three points behind the Hammers after that defeat and the gap is just five now so it’s clear that there isn’t much separating the sides even if the Londoners have more quality in their ranks.

The Magpies have won just two games on the road this season, but significantly they have not lost any of their eight games at teams outside the top six and seven of those matches have produced fewer than three goals.

With that in mind, under 2.5 goals at 9/10 is the first of our West Ham vs Newcastle betting tips.

Chicharito broke the deadlock at St James’ Park where he scored twice and he also bagged the Hammers’ first goal in Monday’s 3-1 win against Fulham. All five of the Mexican’s goals have come against teams in the lower half of the table so we’re tipping the former Manchester United striker to draw first blood at 4/1.

Fabian Schar’s spectacular long-range strike against Burnley was his third goal in six games but the defender can still be backed at 13/2 as an anytime scorer.

The Swiss centre-back also scored twice against Cardiff and with the bit between his teeth looks to be value to continue his hot streak. There has not been a draw between these sides in the last eight meetings but we suspect that statistic could change on Saturday night. 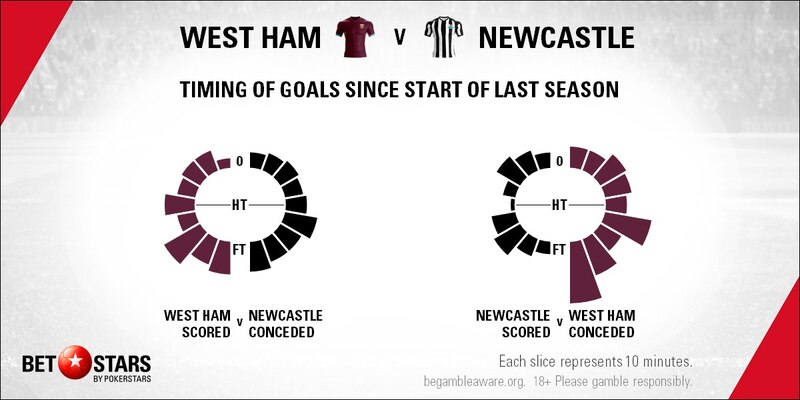 Six of Newcastle’s trips to teams outside the top six this season have ended up drawn and although West Ham have shared the spoils just three times at the London Stadium, two of those have come in their last four home games.

Benitez’s side clearly show more ambition at home than they do away and we suspect a draw at 12/5 is on the cards.

Only Cardiff, Fulham and Huddersfield have scored fewer goals than Newcastle on the road this season and we have already nailed our colours to a low-scoring encounter as one of our West Ham vs Newcastle betting tips.

The Tynesiders have conceded just three times at non-elite teams this season, scoring exactly once in their last four games.

Their last two games on the road have finished 1-1 and a repeat of that scoreline at Premier League odds of 6/1 wraps up our predictions for this game.

Marko Arnautovic will be back in the West Ham squad after illness. Aaron Cresswell (toe) and Arthur Masuaku (knee) are also available.

Newcastle midfielder Jonjo Shelvey will miss out after asking to play for the club’s Under-23s as he returns from a thigh injury.

Newcastle have been involved in plenty of low-scoring games on their travels this season and we expect that trend to continue, so under 1.5 goals is our pick for the game at the London Stadium.